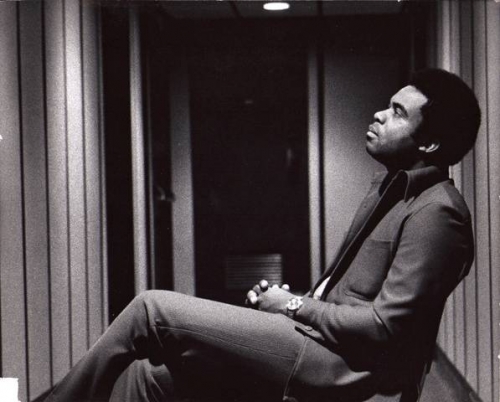 In the pantheon of jazz trumpeters, Freddie Hubbard stands as one of the boldest and most inventive artists of the bop, hard-bop and post-bop eras. Although influenced by titans like Miles Davis and Clifford Brown, Hubbard ultimately forged his own unique sound – a careful balance of bravado and subtlety that fueled more than fifty solo recordings and countless collaborations with some of the most prominent jazz artists of his era. Shortly after his death at the end of 2008, Down Beat called him “the most powerful and prolific trumpeter in jazz.” Embedded in his massive body of recorded work is a legacy that will continue to influence trumpeters and other jazz artists for generations to come.

Hubbard was born on April 7, 1938, In Indianapolis, Indiana. As a student and band member at Arsenal Technical High School, he demonstrated early talents on the tuba, French horn, and mellophone before eventually settling on the trumpet and flugelhorn. He was first introduced to jazz by his brother, Earmon, Jr., a piano player and a devotee of Bud Powell.

Hubbard’s budding musical talents caught the attention of Lee Katzman, a former sideman of Stan Kenton. Katzman convinced the young trumpeter to study at the Arthur Jordan Conservatory of Music with Max Woodbury, the principal trumpeter of the Indianapolis Symphony Orchestra.

As a teenager, Hubbard worked and recorded with the Montgomery Brothers – Wes, Monk and Buddy. His first recording session was for an album called The Montgomery Brothers and Five Others. Around that same time, he also assembled his first band, the Jazz Contemporaries, with bassist (and manager) Larry Ridley, saxophonist/flutist James Spaulding, pianist Walt Miller and drummer Paul Parker. The quintet became recurring players at George’s Bar, the well known club on Indiana Avenue.

In 1958, Hubbard moved to New York at age 20 and quickly established himself as one of the bright young trumpeters on the scene, astonishing critics and fans alike with the depth and maturity of his playing. Within the first two years of his arrival in the Big Apple, he landed gigs with veteran jazz artists Philly Joe Jones, Sonny Rollins, Slide Hampton and Eric Dolphy. He joined Quincy Jones in a tour of Europe that stretched from 1960 to 1961.

Per a recommendation from Miles Davis, Hubbard was signed to Blue Note, where he recorded Open Sesame, his solo debut, in 1960 at the age of 22. The album, which also featured Tina Brooks and McCoy Tyner, marked the launch of one of the most meteoric careers in jazz. Within a year’s time, Hubbard followed up with his second and third recordings – Goin’ Up (1960), with Tyner and Hank Mobley, and Hub Cap (1961), with Julian Priester and Jimmy Heath.

In 1961, Hubbard released what many consider to be his masterpiece, Ready For Freddie, which marked his first Blue Note collaboration with Wayne Shorter. Later that same year, he joined Art Blakey’s Jazz Messengers. In the span of a few short years, this hard-blowing young lion had quickly established himself as an important new voice in jazz.

Hubbard left the Jazz Messengers in 1964 to form his own small group, whose ranks included Kenny Barron and Louis Hayes. Throughout the remainder of the decade, he also played in bands led by a variety of other high-profile jazz artists. He was a significant presence on Herbie Hancock’s Blue Note recordings, beginning with Takin’ Off (1962) – Hancock’s debut as a leader – and continuing on Empyrean Isles (1964) and Maiden Voyage (1965). Hubbard’s other noteworthy session work in the 1960s included Ornette Coleman’s Free Jazz(1960), Oliver Nelson’s The Blues and the Abstract Truth (1961), Eric Dolphy’s Out To Lunch (1964), and John Coltrane’s Ascension (1965).

He achieved his greatest popular success in the 1970s with a series of crossover albums on Atlantic and CTI Records. His early ‘70s jazz albums for CTI – Red Clay (1970), Straight Life (1970) and First Light (1971) – were particularly well received (First Light won a Grammy for Best Instrumental Jazz Performance). Later in the decade, he returned to the acoustic, hard-bop idiom with the V.S.O.P. quintet, which teamed him with members of the 1960s Miles Davis Quintet: Herbie Hancock, Wayne Shorter, Tony Williams and Ron Carter. Hubbard also stepped briefly into the pop arena when he played a solo on “Zanzibar,” a track from Billy Joel’s Grammy-winning 1978 album, 52nd Street.

As the ‘80s got under way, Hubbard was once again leading his own group, playing at concerts and festivals in the U.S. and Europe. He frequently collaborated with Joe Henderson, playing a repertory of hard-bop and modal-jazz pieces. Other associations throughout the decade included Monterey Jazz Festival dates with Bobby Hutcherson; studio projects with Woody Shaw and Benny Golson; and a live recording in Holland (Feel the Wind) with Blakey in 1988.

In 1990, he appeared in Japan in an American-Japanese concert package that also featured Elvin Jones, Sonny Fortune, George Duke, Benny Green, Ron Carter and Rufus Reid. He also performed at the Warsaw Jazz Festival – a date that was recorded and released in 1992.

Other pursuits in the early ‘90s included the formation of a new band of emerging young artists: Christian McBride, Javon Jackson, Carl Allen and Benny Green. He continued to seek out fresh young talent as the decade unfolded by collaborating with the New Jazz Composers Octet. Hubbard performed and recorded with the Octet – a collective led by fellow trumpeter David Weiss – for the last decade of his career, culminating with his final recording, On The Real Side, released in 2008.

Despite failing health as the new century got under way, Hubbard continued to carry the jazz torch by participating in clinics and residencies at various colleges around the country to share the wealth of his knowledge with up-and-coming artists. In 2006, the National Endowment for the Arts granted Hubbard its highest honor in jazz, the NEA Jazz Masters Award.

He suffered a heart attack in late November 2008 in Sherman Oaks, California, and died a few weeks later, on December 29, at the age of 70.

At his peak, Freddie Hubbard was a brilliant virtuoso performer with a rich, full tone that remained consistent in slow passages as well as fast ones. As one of the greatest hard-bop trumpeters of his era, he created impassioned blues lines without sacrificing the context of the music he was playing. He was perhaps one of the greatest technical trumpeters ever to play in the jazz idiom, and arguably the most influential.